Here are the pictures from our pita bread experiment. Maybe two of the dozen I made actually puffed up and separated, but they still tasted great. This is the recipe I had pinned, but I’m not sure it’s the one I used. This one seems closer to what I remember actually using. This is my reminder to try again. After all, practice makes perfect! 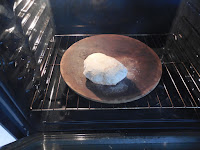 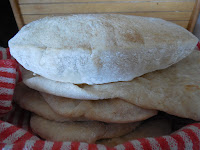 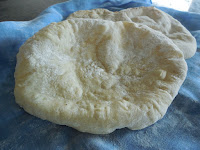 Dissolve sugar in 1/2 cup warm water.  Sprinkle yeast on top and allow to sit for 10 minutes. Mix to ensure all yeast is dissolved. In a large mixing bowl, combine the flour and salt. Make a well in the middle of the flour and add the yeast mixture. Mix with a spatula and slowly add more water until flour is incorporated.

Once a ball of dough is formed, knead the oil into the dough. Knead the dough on a lightly floured surface until it is elastic and no longer sticky (approximately 10 minutes.)

Coat the inside of a mixing bowl with oil and place dough in bowl to rest. Cover with a damp towel and allow to rise until it has doubled in size (1-2 hours.)

Punch down dough and pinch off 8 sections. Roll each piece into a ball and cover with a damp tea towel. Allow to rest for 30 minutes. Meanwhile, preheat oven to 500°. Also preheat un-greased baking tray or pizza stone.

Roll out dough on a floured surface until about ½ cm thick. When rolling, don’t let the rolling pin go over the edge of the pita, always keep at least ½ cm in front of the pin.

Transfer pita to baking tray and bake for approx 5 min (or until puffed up and golden on top).  In the first few minutes in the oven (before the pita puffs up) it is important not to open the oven.

Remove pita from oven and immediately cover with a damp tea towel and then in storage bag to prevent them from drying out.