Today would have been my grandfather’s 101st birthday.  To honor his memory, I thought I’d share a little story that I discovered when cleaning out my kids’ “boxes” last month.  This comes from a letter my mother wrote Weston the summer after he graduated from high school, when one of his part-time jobs was selling knives.

“I’m not a salesman, unless I already have a customer.  When my Dad, your great-grandpa, Arthur White, left home to “seek his fortune” he was in his later twenties.  He and two friends left Clearfield, Utah to “seek their fortune” in the big city of Los Angeles, California.  They had connections and a job in a canning factory before they left home.  When the canning season was over, they couldn’t find work, so the two friends went back to Utah.  My dad says he was determined to prove to the folks back home that he could make it, so he stayed.  He got a job selling magazines.  Of course, that is not what he wanted to do.

“However, while selling magazines, he saw a sign in a window advertising for a repair person.  I think it was on radios or something similar.  When he inquired about the job, the owner of the shop gave him an item and said if he could fix it, he was hired.  He fixed it!  The man even let him sleep in the little shop and I think he had a hot plate. I can’t remember all of the story.

“So opportunities for work and other living conditions improved from there and sometime later he met my mother, Dorothy Wilson, on the boat to Catalina Island – on the dance floor.  He also sang with the stake Young Single Adults of that day who provided music and talks to different sacrament meetings in the area.  That group fellow-shipped my mother and her study of the gospel.”

Eventually Arthur baptized Dorothy and they were married and started a family, but they never would have met if Grandpa hadn’t been determined to make his own way in life.  What a great example of hard work and perseverance he left for his posterity.

Just in case you weren’t aware of it, one of the new features of FamilyTree (the Church’s new family history website) is the ability to add stories.  It’s stories that really bring family history to life.  So, take the time to add them so all the cousins can know what you know! 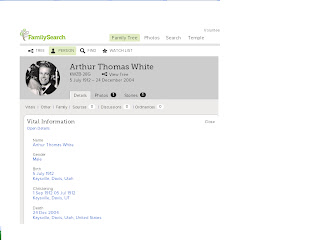 To add or read stories you click on the “stories” tab which is to the far right of the default “details” tab under the individual’s name.