Recently we were told that the best clam chowder ever is found at Market Street Grill in Utah. While we believe our informants (which included our parents!), we’ve always wondered how a city 1,000 miles inland can be known for fresh fish. I guess someday when we’re in town we’ll have to actually go to the restaurant and taste their fish in person. In the meantime, however, we’re always up for a good recipe experiment, and this one uses canned clams, so it was a good one to try.

I knew I’d like it, because it’s very, very similar to the clam chowder recipe I’ve used for decades, but Wayne said no more experiments are necessary, and I can use this one for the rest of our lives. I guess that means it really is the best ever clam chowder! While I tried to follow the copycat recipe I found as closely as possible, I did end up making a couple of minor changes. Does that mean it’s truly the Market Street Grill recipe or my own creation? 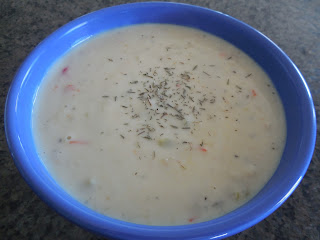 The Best Ever Clam Chowder

Simmer vegetables in juice of clams (and enough water to cover vegetables if necessary), along with the seasonings. Cook until tender, about 25 minutes.

Make a white sauce by melting the butter, stirring in the flour, and whisking in the cream. (Note that the copycat recipe said to bake the flour and butter together – “to eliminate the raw flour flavor and stabilize chowder.” My oven was in use, and I didn’t want to dirty an additional pan, so I did that on the stove at a very low heat – you don’t want it to burn.) Cook until thick, then add the vegetable mixture with the clams and sherry.

Heat through and serve warm with sourdough bread. Serves 4-6.

*I used 1 cup cream and 2 cups low-fat milk because I forgot to buy half-and-half. (See here.) That was less than the four cups called for in the recipe, which made it extra thick. It was almost too thick, so I may add the extra cup next time**, just to see if someone call tell that I did make an adjustment. And I may live wildly and double the potatoes as well!

**I just re-read my Milk Conversion post and realized I followed the directions for skim milk, not low-fat milk. So, 1 cup of cream and 3 cups of low-fat milk would actually have been the correct ratio!