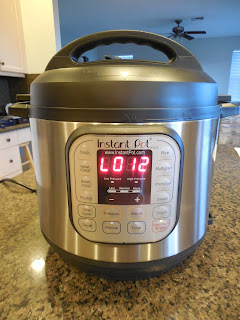 Our children were so thoughtful and sent us an Instant Pot for Christmas this past year. Since gifts are meant to be used, I’m trying to do so. Here are some of the things we’ve tried so far: 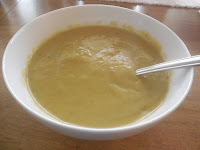 Green Pea Soup – This was a perfect “first choice” for trying our new appliance! I used our regular recipe, substituting chopped ham for the ham hock (although supposedly using the bone works okay), and cooked it for 20 minutes, using the instructions found here. 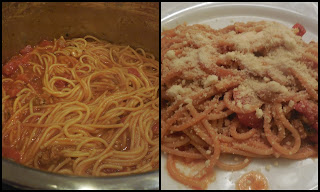 Spaghetti – I tried the recipe from the Salty Marshmallow, found here, and it turned out well. Well, I started there. I used my own spaghetti sauce, and since it doesn’t come in a jar, I had to do some figuring. (28 oz can tomatoes, 16 oz can tomato sauce, and about 3 cups water plus the regular seasonings) And I used “wheat meat” instead of raw hamburger. Also, note that one pound of pasta makes a lot! We were eating leftovers for days. At least they were delicious leftovers. 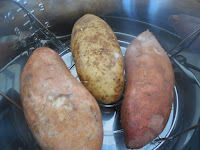 Baked Potatoes/Sweet Potatoes – Place potatoes on the rack with 1 cup of water in the bottom of the pan. Process for 13 minutes on high pressure, wait for 10 minutes, then release the pressure. This was enough time for a small potato, but the larger ones were still hard, so I wasn’t really impressed with how this turned out, and it didn’t seem to save any time. If I don’t have an hour to bake potatoes in the oven, I’ll just need to remember to allow the time to slow cook them in a crock pot. 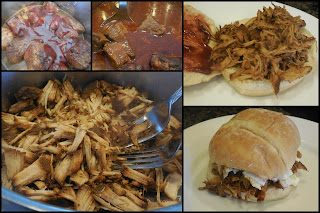 Pulled Pork – I used this recipe, but you really don’t need one. Just rub 3 pounds of pork chunks with spices, let sit for a bit if desired, brown in the pot, then add 1 cup of chicken broth and 1 cup of barbecue sauce and process for one hour on high. Shred, add another cup of barbecue sauce and serve. This time we tried Sweet Baby Ray’s barbecue sauce because that’s what they served at the restaurant we tried at the South Florida Fair and Wayne really liked it. However, I’m still partial to KC Masterpiece’s original recipe.