Wayne’s next Dutch oven recipe called for a tri-tip roast, which meant that I had to do some research and find one. The book described it as the butt end of the sirloin, with the grain going in three directions – hence the name tri-tip. 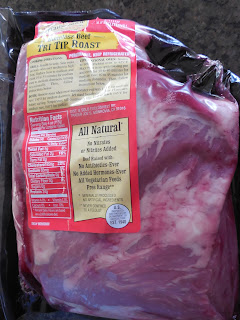 I looked at these sites as well –

The tri-tip is a cut of beef from the bottom sirloin primal cut. It is a small triangular muscle, usually 1.5 to 2.5 lbs per side of beef. In the United States, this cut was typically used for ground beef or sliced into steaks until the late 1950s, when it became a local specialty in Santa Maria, California, rubbed with salt, pepper, garlic salt, and other seasonings, cooked over red oak wood and roasted whole on a rotisserie, smoked in a pit, baked in an oven, grilled, or braised by putting a pot on top of a grill, browning the meat directly on the grill surface before and after the braising. (The tri-tip is still often labeled the “Santa Maria steak”.) Most popular in the Central Coast of California and Central Valley regions of California, it has begun to enjoy increasing popularity elsewhere for its full flavor, lower fat content, and comparatively lower cost.

Due to its triangular shape, tri-tip also goes by the name “bottom sirloin butt” and “triangle roast”. Tri-tip is nicely marbled, tender, and one of the most flavorful cuts of beef you’ll find. As a whole, untrimmed roast, tri-tip may weigh about 5 pounds. The tri-tips you’re likely to find at the supermarket will weigh 1-1/2 to 2-1/2 pounds and measure 2-3″ thick.

Amici Market, located at 155 N. County Rd. in Palm Beach (next to Green’s Pharmacy), carries tri-tip, although it must be ordered at least a day in advance. Call 561-832-0201, or visit myamicimarket.com.

However, I also heard that Trader Joe’s carried tri tip, and since that’s closer than all the other options, I tried it first. Success, they do carry it! And that’s nice, because I think we have several recipes that call for that cut of meat in our Dutch Oven Cookbook. 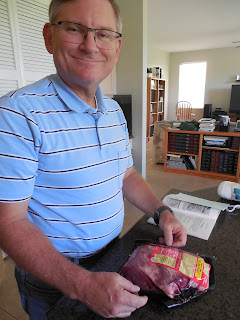 The first one was basically a pot roast. The entire tri tip was browned on all sides in a bit of bacon grease along with some sliced mushrooms. That baked in a low oven for an hour. Then we added quartered onions, potatoes and carrots and cooked it for another 1 1/2 hours. Although it took a bit of time, it was simple and delicious!