The Evolution of Our Family Scripture Study

Cocoa asked me to share some ideas on how we did family scripture study for her “Establish a House” series.  I’ve re-posted it on my own blog so I can find it again, but go to hers HERE to read the comments which have some wonderful suggestions to make this work. 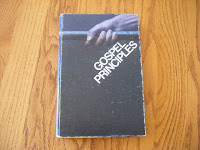 One day when I was in high school my parents announced that we were going to start having family scripture study every evening.  I don’t remember too much about the ensuing experience, other than that we used Gospel Principles as our study manual, and that with eight children, with varying degrees of cooperation, it was pretty much utter chaos. However, it did instill in me the desire to start family scripture study early with my own children, and not wait until they were teenagers. 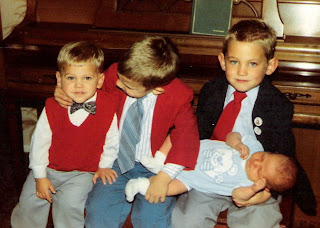 Phase One: Crash and Burn

Fast forward several years.  By this time I was married to a wonderful man and we had four little boys.  The oldest had just started school and was learning to read and I felt that it was time to start family scripture study.  My husband wasn’t quite on board with the idea, however, he couldn’t see how there would be time to fit it into our schedule.  After all, he was busy working full-time, taking MBA classes part-time, and serving as the ward Young Men’s President in his spare time.  He was right, so I decided that it’s just something I’d have to do.  I vividly remember one night when he was at school or Mutual, putting the baby to bed and gathering the other kids on the couch to read a chapter from the illustrated Book of Mormon Stories.  The two-year-old wandered off, and I decided to not chase him.  A couple of minutes later we heard a big CRASH!  Fortunately, he was okay but the contents on top of my dresser weren’t.  I remember being so frustrated!  I was trying to do the right thing, wasn’t I?  And then the answer came, “Be patient.  Let your husband take the lead for family scripture study.  It’s his priesthood responsibility.”  That may not be the answer for everyone, but it was the right one for us.  I had a wonderful, worthy, priesthood leader husband, and I needed to support him.  We were having weekly family home evening and daily family prayers and that was enough right then.  I still read scripture stories to the kids, but it was part of an individual bedtime story routine, not as family scripture study. 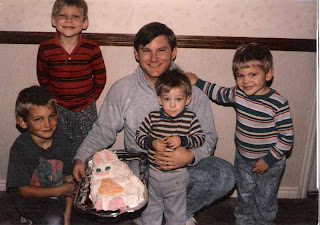 Fast forward a few more years – to Mother’s Day 1992.  My husband was asked to speak in sacrament meeting, and as part of helping him to prepare, we read President Benson’s talk “To the Mothers in Zion.”  In that talk he stated, “Take time daily to read the scriptures together as a family. Individual scripture reading is important, but family scripture reading is vital.”   After discussion we decided it was time to start having family scripture study.  We presented our plan for family night and started Tuesday morning.  One of the unique things that I love about my husband is that he likes to do things in an orderly fashion.  With his encouragement, the family voted to start our reading with Genesis 1:1, and go through the books in order – first The Bible, then the Book of Mormon, then the Doctrine & Covenants, and finally thePearl of Great Price.  We also decided that reading at breakfast time would fit our schedule the best.  So, that’s what we did.  A month later I wrote in my journal: “We did start reading the Bible at breakfast and I’ve noticed a difference in our home.  There is less teasing and quarreling, and I think that’s enough incentive to never stop reading the scriptures.  I’m so thankful the boys get along well with each other and that there’s love and harmony in our home.” 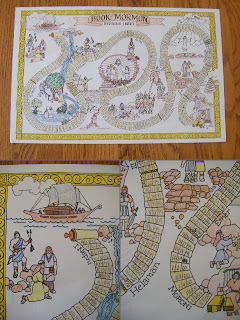 This phase continued for years.  At first, Dad did all the reading.  Once we completed the entire standard works (which took years), we read the Book of Mormon through a few times.  Once we listened to the tapes and followed along in our books.  Another time or two we each took turns reading a verse (oldest to youngest).  We even read it in Spanish once, as a way to feel closer to our missionary son.  As the kids grew older and started seminary (and Dad’s commute lengthened), we moved it from breakfast time to bed time. 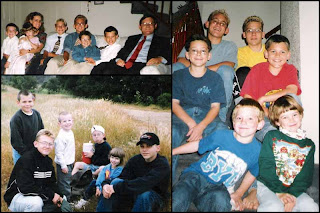 During this time I noticed a couple of things, in addition to the lower decibel level that the prophets’ promised.  One was that treating family scripture study as a “church meeting” really helped with reverence in sacrament meeting.  Each day our boys got a chance to practice sitting upright, while listening quietly and refraining from poking each other.  That made Sundays a lot easier.  Another was how it helped our children learn to read quickly.  Just before our daughter turned six, we moved from California to Florida (states with differing age rules).  Our daughter’s first grade teacher looked at her fall birth date and was concerned that she was placed incorrectly, because she was a full year younger than the other students in her class.  Then the teacher heard her read, and her response was “Don’t you dare take her from my class.”  When she shared that with me, I realized that her ability to read well was a direct result of reading the scriptures regularly from the day she was born. 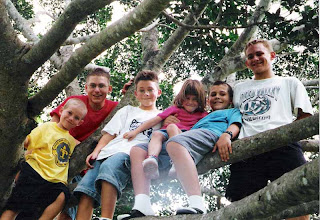 I had “daily” instead of “regularly” in that last sentence, but took it out, because this wasn’t a daily thing.  We struggled and had weeks when we got out of the habit, particularly when schedule changes came along.  One that I remember in particular was when my husband started a new job in a city four hours away from where we lived.  We couldn’t move until we sold our house, which took several months, so during that time he wasn’t home from Sunday evening through Friday night.  I had learned my lesson about letting him take the lead for family scripture study, so we stopped.  After a few weeks, I noticed a bunch more bickering between the kids and it just seemed noisy and definitely not peaceful in our home.  The light bulb finally went off and I realized it was because we had stopped reading the scriptures together every day.  We saved the “real” Book of Mormon for when Dad was home on the weekends, but we pulled out the scripture stories again for during the week.  Within a few days, things were back to normal.

Also, as we were working on building the habit, I remember suggesting that if we skipped a day, we should read two chapters the next day.  My very wise husband reminded me that it doesn’t work that way.  If we skip a meal or two, we don’t eat twice as much the next time (even if some of us try), because over-eating isn’t good for us either.  Scriptures are spiritual nourishment.  If we forgot to read, we just repented and tried harder to remember the next day.
Phase Three: Add a Hymn
After a while, I thought it would be nice to add singing a hymn to our family scripture study and prayer, to make it more of a devotional time, but my dear husband wasn’t so sure.  Then one day he read the section in the Church Handbook of Instructions on music, which lead him to the preface of the hymn book: “Teach your children to love the hymns. Sing them on the Sabbath, in home evening, during scripture study, at prayer time. Sing as you work, as you play, and as you travel together.” Guess what we added to our family scripture study then?  It’s been wonderful.  Every night we sing a different hymn.  We started with hymn #1 and went all the way to #341. We’ve sung them in alphabetical order and by topics.  Now we’re going through the author/composer index. 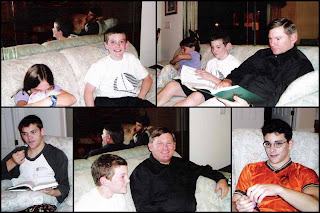 At one point, after a stake conference in which our stake president encouraged each family to have daily scripture study, we evaluated how we were doing and realized that even though it had been a habit for years, there was still room for improvement, particularly on the weekends.  The tendency had been to go from school and work to dinner to entertainment to a very late bedtime, and no one wanted to take the time to read scriptures, although we did have family prayer.  We decided to move scriptures and prayer from after the “Friday/Saturday night movie” to before it.  That worked!

We’ve been working on this family tradition for over twenty years now, and yet there’s really only one specific night that I remember.  Even then, though, I have no idea what chapter we read.  All I remember now is that when Dad called for “Scriptures and Prayer” the oldest son at home didn’t show up in the living room.  His little sister was sent to remind him, but that didn’t work.  I went to cajole him into joining the family, and that didn’t work either.  He was tired and in a bad mood and just wanted to sleep.  Fortunately, the Spirit prompted me to suggest we take the family to him.  He still didn’t participate, but the rest of us gathered around his bed, read our chapter, sang a short hymn, had prayer, and left him alone. Later I learned that was a very powerful lesson to him on the importance of family scripture study, and it was definitely the best way to handle the situation.  Fortunately, it was a one-time occurrence! 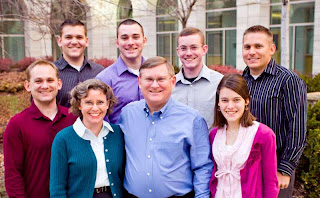 Phase Four: What’s Next?
Now we’re empty-nesters, and we still have daily family scripture study.  And it’s still evolving.  Just this week we decided to note if the hymn we sing could be classified as a prayer or not.  Sometimes I miss the challenge of trying to get active kids to settle down for just a few minutes, and I definitely miss the full octet for the hymn, but I’m grateful for the memories of the past.  I feel like we didn’t spend a lot of time “studying” the scriptures, and if I were doing it over again, I’d try to add some discussion time to the reading.  However, I’ve learned that it’s not so much what you learn intellectually that’s important.  What’s valuable is the sense of family unity that’s created as you spend time together, developing a greater love for each other and for the Savior and his gospel.

I’m grateful to see our sons carry this family tradition into their own little families, and I’m open for suggestions on how to encourage them to keep this habit going, and to share my love of the scriptures with young grandchildren who live thousands of miles away!