I’ve liked the idea of roasting pork at a high temperature to sear it, then turning the oven down to finish the cooking. However, we want to serve dinner shortly after church today and there won’t be time to use that method. I also don’t want to use the crock pot which I’m afraid will overcook this nice cut of meat. I guess this would be a good time to see if the Instant Pot is really faster, but I’m not prepared to experiment with that on our company. So, there’s the long introduction to say I’m going to try this method, which is roasting it at the lower temperature (which I can do using the time bake feature on our oven) and then searing it at high temperature at the end once we’re home again. 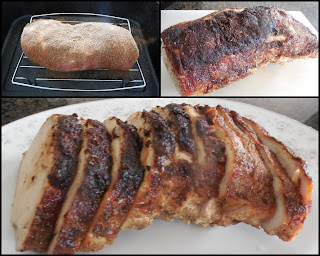 Rub the pork roast with a mixture of desired seasonings, then place on rack in roasting pan. Roast at 350° for 20-25 minutes per pound, or until internal temperature is 145-160°. For my 3 1/2 pound roast that would be 70-75 minutes. Remove from oven, cover with foil, and let sit for 30 minutes. Preheat the oven to 475° while making gravy. Just before serving, remove foil, place in a clean baking pan and roast for 10 minutes. Then slice and serve immediately.

Note: This time around it reached 160° after 20 minutes per pound, so I skipped the final sear. Maybe next time I’ll try cooking it at 325° instead. It was a bit disappointing that even though I was trying to plan ahead so that it wouldn’t be overcooked, I failed. However, it was just barely overdone, and not super overdone, so all is well, and we’ll know for next time.