Someone brought Monkey Bread to the birthday brunch at work and I was very gently chastised for not ever serving such deliciousness to Wayne before. Time to rectify that! However, traditional Monkey Bread recipes are made to serve a crowd, and two is not a crowd. Among the myriad of recipe options, I found some guidelines for a mini version, along with a couple of posts debating the merits of canned biscuits vs. homemade yeast dough, and decided to create my own version. We’ll see how it turns out! 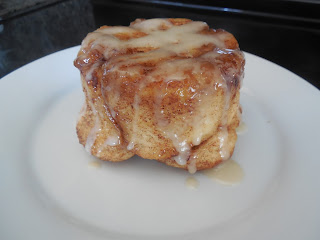 It seems most versions have you coat the pieces of dough with dry cinnamon and sugar, and then pour a buttery-caramel sauce over the whole thing before baking; after inverting the cooked product, it’s topped with a glaze. I guess the whole point is to make it super gooey! Baking it without the caramel sauce causes the finished product to fall apart. Although it’s a bit more tedious, the version I remember is the Rhode’s dough one, with dipping the dough pieces in butter, then rolling in the cinnamon-sugar, then baking. You can let me know which version you prefer! 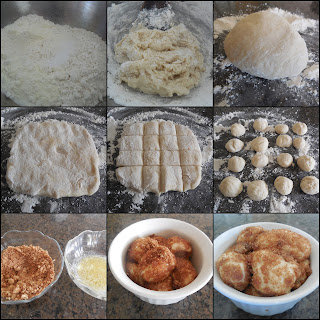 Melt the butter in a small bowl, add the water and dissolve the yeast in the mixture. Combine the flour, sugar, dry milk and salt in another bowl. Slowly stir in the milk mixture. Knead until smooth, then let rise until doubled.

After the dough has risen, divide it into 16 small pieces. Combine the brown sugar and cinnamon in one bowl and put the melted butter into another. Grease two small ramekins. Roll each dough piece in the butter, then the cinnamon-sugar, then place 8 pieces in each ramekin. Cover with plastic wrap and let rise again for about an hour, or refrigerate overnight.

Bake at 350° for 15 minutes. Let cool for 5 minutes, then invert on a plate. Combine the powdered sugar and milk and drizzle on top. Serve warm.

The Verdict: First, even though I scaled this way down, it still should have served four and not two; it was a hefty 350 calories per serving! However, I liked it and so did Wayne, but he said it wasn’t quite like what he had at work. That person probably used the Rhode’s dough version which included a caramel glaze. I guess that just means we’ll have to try it again sometime.