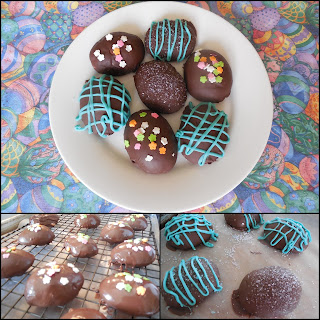 Earlier this month Wayne mentioned it  had been a while since we’d had marshmallow bunnies for Easter, and that reminded me that many years ago (at least 30!) I attended a Relief Society class where we learned how to make homemade marshmallow eggs. I figured it was time to try again. I couldn’t find my old recipe, but Google came to the rescue. Since I usually have success with recipes from Taste of Home, I tried a version I found there first. 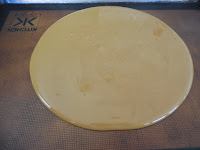 However, I should have followed the instructions to double-check my candy thermometer with some boiling water before starting. When the recommended temperature produced burnt sugar caramel, I decided to do so and discovered my thermometer was 40 degrees off. I considered rescuing the result, but in the end just threw it out. I couldn’t think of anything that would successfully disguise the taste of burned food, not even chocolate.

Next I tried a version found here. It had the same ingredients, but put them together a bit differently, and didn’t require a candy thermometer!

Make a mold by filling a couple of 9×13″ pans with flour, then pressing an egg into the flour. I got 11 out of each pan.

In a small pan, sprinkle the gelatin over cold water and let soften. Turn on the burner, stir in the sugar and bring to a boil stirring constantly. Cook until sugar has dissolved, about 3-4 minutes.

Place corn syrup in a large bowl, start beating, and stir in sugar syrup. Keep beating until mixture is stiff, about 10 minutes. Stir in vanilla. Spoon lukewarm gelatin mixture into egg depressions; dust with flour. Let stand for 3-4 hours or until set.

Brush excess flour off marshmallow eggs. Dip each in melted chocolate. Place flat side down on waxed paper. Decorate as desired. Let stand until set.

Note: Sprinkling with colored sugar or candy sprinkles is easy, but we didn’t particularly care for the “crunch” so preferred those drizzled with another color of chocolate. Wayne would have even liked double-dipping in the chocolate to get a higher chocolate to marshmallow ratio, but I thought it was perfect as is. In addition, placing the covered eggs on a wire rack is not a good idea; use the waxed paper.