Every Sunday Wayne tries to input one family from the book “Descendants of Johannes Hug, Jr.” into our genealogy program and the Church’s NewFamilySearch website.  Today it was the family of Oscar Albert Hug who is his second cousin once removed on his mother’s side.  As we entered the family’s information we noticed we were missing a death date for one of them, so we did some sleuthing.  I found here obituary here, which included this lovely picture.  Wayne says she looks like his grandma.  Isn’t she beautiful? 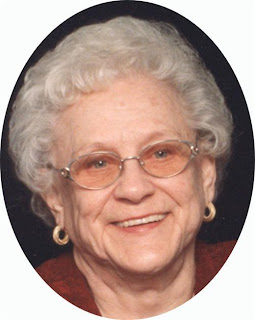 And she was so accomplished!  If you have a moment, read her obituary:

Kathleen B. Hoffman, age 90 of Hot Springs Village, AR, died Tuesday, December 27, 2011, in Centerview, MO. She was born on Monday, November 28, 1921, in Highland, IL, the daughter of Oscar A. and Katherine M. (nee Nagel) Hug. On Thursday, March 23, 1944, she married Russell D. Hoffman who passed away on November 21, 2011. Kathleen was born and grew up in Highland, graduating from Highland High School in 1940. She attended MacMurray College in Jacksonville, IL for 2 years, where she was on the equestrian team. She left college to marry Russell Hoffman. While growing up, Kathleen’s parents purchased a horse, Captain Kidd, fulfilling her longtime dream to have a horse. The 2 took part in area horse shows, winning many honors. Kidd could also perform tricks, and Kathleen and her horse performed at county fairs, horse shows, and parades, including the Highland Centennial in 1937. She was a member of the Queen’s Court during the Centennial. Kathleen and her husband, an officer in the Navy Air Corps during World War II, lived in Hollister, CA, and Fallon, NV, where the Navy had an air base. She returned to Highland with her husband in March 1946 and lived there until they moved to Hot Springs Village, AR, in 1998. In 1960 Kathleen organized and became the leader of the first 4-H horse club in the state of Illinois, in addition to a mounted drill team that performed at county fairs and the Illinois State Fair in Springfield. She taught her three daughters to ride horses, and they went on to earn national recognition for their abilities. She also raised thoroughbred and American Saddlebred horses for many years. Kathleen worked as an artist for Art Textile Corp., and Highland News Leader where she did ads and page layout work. She was a talented artist, equestrian, dancer, gardener and bridge player. Visitation will be held from 4:00 PM to 8:00 PM on Wednesday, December 28, 2011, at Spengel-Boulanger Funeral Home in Highland, IL. No service will be held. Interment will be at Highland City Cemetery in Highland, IL. Memorial contributions may be made to Highland Animal Shelter or Alzheimer’s Association.

Note: I think it was neat that she lived in Hollister, California.  That’s where I lived when I was in high school!  (although it was long after 1946 so I never would have known her)  And she was living in Hot Springs when we went there for our family vacation.  It’s too bad we didn’t know we had a relative living there then.