Have I mentioned that there are several cans of dried beans in our food storage? And that we’re trying to use them up? And that they’re so old they don’t get soft no matter how long you cook them? So, after the beans have soaked overnight, and then simmered for hours, I’ve put them through the food processor, and now am trying to find recipes in order to use the pureé. Here’s one that turned out acceptably, although you have to be careful when eating the burger because the patties are quite fragile. 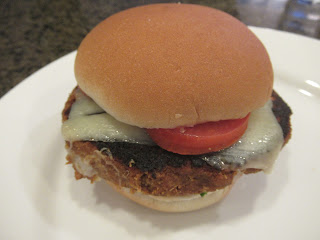 Combine the pepper, onion and garlic in a food processor and pulse until finely chopped. Drain out excess water and combine in a large bowl with remaining ingredients. Divide mixture into four patties, about 3/4″ thick, and place on a greased baking sheet. Bake at 375° for 10 minutes; carefully turn and bake another 8-10 minutes. Serve on your choice of a hamburger bun with sliced tomatoes, onions and pickles.

Note that the original recipe called for 1/2 cup bread crumbs, but I needed to use 1 cup just to be able to form the mixture into patties. The original recipe also called for black beans, but I used white beans.  I also used the entire 1 tablespoon of cumin called for in the recipe, but that made the patties quite bitter. 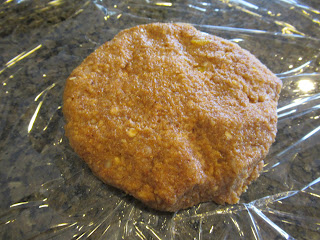 Another note: This made four huge patties, two of which I stuck in the freezer for a later date. That later date was today. They’re still fragile, so I chose to eat mine with a knife and fork instead of in the bun, although I topped it with cheese, tomatoes, pickles and ketchup. Wayne was not happy this was on the menu, and suggested it might be even worse than avocado crème (which is saying a lot). It took three cookies to get the bitter taste out of his mouth!