Somewhere I noticed that it was National Empanada Day. At first I thought it was today, but it turns out to be tomorrow. Calzones were on the menu, and since I hadn’t picked a specific recipe, and since I can fix whatever I want, and since Wayne loves empanadas and I never make them, I figured I’d try them out today. We can have leftovers tomorrow in honor of the holiday.

He learned to love them while serving his mission in Chile, so I’m going to go with this recipe which is supposedly authentic. If these don’t taste the way he remembers, I’ve added a couple more dough options below. If that doesn’t work, I guess I’ll just have to ask Brad for his recipe. Looking at that post reminds me empanadas would be a great way to use the Picadillo I stuck in the freezer last week.

He likes the plain cheese ones best, so I’m just going to use mozarella cheese inside, and then bake them. I’m trying to decide between 200 degrees for 30 minutes or 400 degress for 8 minutes. Since we’re experimenting, maybe I’ll try both!

Combine flour, salt and paprika. Stir in melted lard and water and mix until the dough is soft and doesn’t stick to your fingers. Wrap in plastic wrap and chill for at least an hour. Divide into twelths, roll out into a thin circle, fill with your choice of filling, and crimp the edges. If desired, chill. Bake or fry and serve warm. 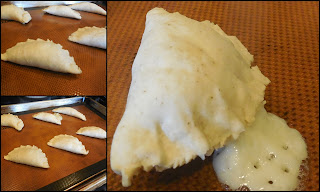 Note: The 200 degree oven didn’t work. Well, it did eventually cook them, but they’re still pale and don’t look appetizing. They didn’t really brown at 400 degrees either; maybe I should have brushed them with an egg wash. Then I tried frying a batch, and realized it wasn’t as much work as I was anticipating. They looked gorgeous, and tasted a little bit better than the baked ones, so frying’s my choice for future empanadas. 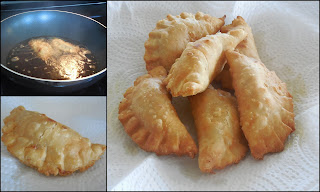 This one (link broken)  uses butter instead of lard: