This morning I asked Wayne what he wanted for breakfast, with the caveat that it needed to take ingredients we already had. He suggested Eggs Benedict. Slight problem – no English muffins or Canadian bacon. However, we decided that we could do something similar, particularly since I had a couple of egg yolks just waiting to be made into Hollandaise Sauce. I also discovered that although I had started an entry with our recipe for Hollandaise Sauce, I had never posted it. I was probably waiting for pictures, and it’s not something we do often. So, here it is, still without pictures*.

After years of trial and error, we finally found a recipe/technique that works for us. Unfortunately, the process takes two hands which means there still aren’t pictures! Start with 1/2 cup of cold, salted butter cut into chunks. Melt a couple chunks using a double boiler. Combine 2 egg yolks with 2 tablespoons lemon juice. Melt a couple more chunks of butter. Stir in the egg mixture and while whisking constantly, gradually add the remaining butter chunks. Remove from the heat as soon as it starts to thicken. (I could take a picture of the finished product!) 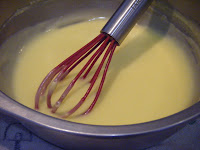 Instead of Eggs Benedict, we decided to make a version of Eggs Florentine. It started with poached eggs cooked until the whites were firm but the yolks were still runny. Or, at least, that was the goal. Sometimes it doesn’t always happen the way we want. 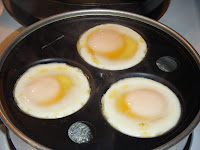 We made toast (including some mini bagels that needed to be used), heated up some spinach and added some cheese to the eggs just before they finished cooking. 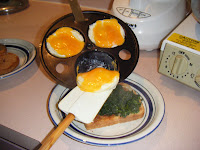 And then we assembled it all. 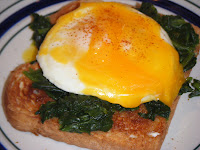 But it wasn’t complete until topped with Hollandaise Sauce! 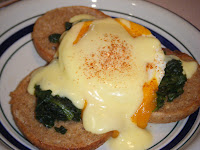 Wayne loved his breakfast. Amazingly, so did Steven. I really wasn’t expecting him to like it at all, but he said the combination of flavors (not necessarily textures) was surprisingly pleasing.

*Pictures have now been added!