We’ve lived in Florida for 12 years now.  (Wow, that doesn’t seem possible!)  And, technically, South Florida isn’t really “The Deep South” but there are a couple of southern foods we’ve never really tried.  This month we did. 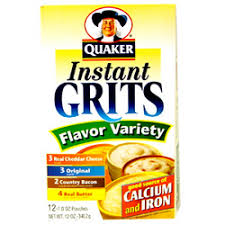 When we first moved here I figured we should give grits a try.  Not knowing that there was a huge difference between the instant version and the “real” version, I bought a box of instant grits.  I thought that having only single servings of different varieties would be a great way to sample that southern food.  I thought wrong.  I tried a couple of them, took one bite, and threw the rest out.  Sorry Quaker.

A couple of months ago we had one of Wayne’s co-workers from North Carolina over for dinner and she gave us a package of “Crook’s Corner Stoneground Grits” – the real deal.   On the back were four recipes and we decided to give them a try.  You know what?  I really do like grits, particularly when they’re used as a base for something else.  This Shrimp and Grits was delicious! If you don’t want to follow an actual recipe, just cook up some cheesy grits.  In another pan sauté some bacon, mushrooms, shrimp and green onions.  Spoon on top of the grits, add a dash of Tabasco, and you have a delicious appetizer, or even a complete meal!

Another food I’ve never really been interested in trying was okra.  However, the next recipe in the Columbia Restaurant Cookbook was Okra Stew Cuban Style, so we gave it a try.  It wasn’t as bad (read slimy) as I expected it to be, but we won’t bother making it again either.  If you want to try it, let me know and I’ll send you the recipe.

By the way, those round balls are plantain dumplings. This stew was definitely an interesting combination of flavors and textures.