This recipe came from the Better Homes and Garden Cookbook we received as a wedding gift.  It’s gotten a lot of use over the years!  Since I didn’t have time to do cinnamon rolls for breakfast this morning, I pulled it out again for cinnamon biscuits.  And because it is Valentine’s Day, I added some leftover sprinkles (from decorating dipped pretzels yesterday) just to make them a bit more festive. They taste just fine, and maybe even better, without them! 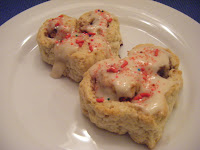 Combine dry ingredients and cut in shortening.  Stir in milk just until dough combines, then knead gently on a lightly floured surface for 10-12 strokes.  Roll or pat to 1/2″ thickness and cut into desired shapes.  Transfer to an ungreased baking sheet.  Bake at 450° for 10 minutes or until golden.  Serve warm, with as much butter and jam as your heart desires.

To make Cinnamon Biscuits, prepare as directed and roll the dough into a rectangle.  Spread with softened butter and sprinkle with cinnamon sugar.  Roll up, slice, and bake.  Drizzle with glaze while warm.

And to make Heart-Shaped Cinnamon Biscuits, once the cinnamon topping is in place, roll up one long side, but only half-way.  Start rolling the other long side so they meet in the center.  After slicing the individual rolls, pinch the center to make the heart point.  Place on pan and bake as normal. 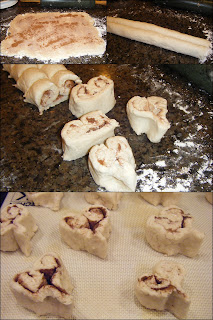 Note: I tried the sour cream variation this week and didn’t particularly care for it. I had to add extra flour just to be able to pat out the dough, and then the actual biscuits were too tangy. This is just a note to myself that I don’t need to try that again!