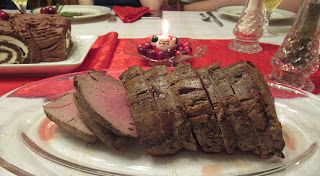 Last year we tried a beef tenderloin roast for our Christmas dinner. We really enjoyed it and decided we would have one again this year. However, I didn’t record my notes, so I had to figure everything out again! Trying to prevent that from happening next year. First thing to remember is that this year and last we bought an untrimmed tenderloin from Costco; next year Wayne wants to try a trimmed one (choice quality, not prime, for now).

Second thing to remember is how we trimmed it. Apparently there’s a piece of cartilage or something that you need to pull out. Wayne did the honors.

I’m pretty sure that last year I cooked the entire piece together. This year I read that cutting it in half makes it easier to roast, so we decided to try that. We actually had 3 “roasts” from our 7 1/2 pound piece  – a one pound, a two pound and a two and a half pound one, along with the trimmings. We tied each of them to help them keep their shape during the cooking process.

We did this process in the morning, then  rubbed the roasts with garlic salt and pepper (a couple of sites suggested using seasoning salt but we opted for something more traditional), and stuck them back in the refrigerator. I took them out an hour before cooking to bring them to room temperature.

Since I couldn’t find a consensus on how long and at what temperature to cook them, we had to experiment a bit, starting with the 2 pound one. I preheated the oven to 425 degrees and also heated some olive oil in our cast iron skillet. After quickly searing the roast on the stove, I put it into the oven, and then started checking the temperature. At 15 minutes it was below 100 degrees, 10 minutes later it was at 108. Six minutes later it was at 130. I was a bit disappointed at how quickly it rose in those last minutes, because the plan was to take it out at 120, but it still turned out fine. Next time we’ll give it 30 minutes. 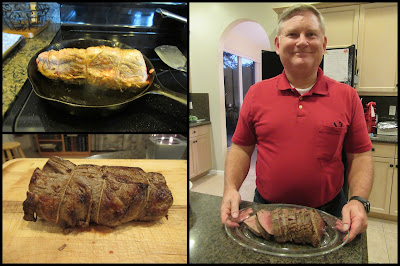 We let it rest for about 15 minutes while we gathered family and ate our salad, and then carved and served the very tender and delicious roast beef.

After searing the other two pieces individually, I put them into the oven at the same time. It took the one pound roast 22 1/2 minutes to reach 115 degrees, at which point I removed it. The two and a half pound roast wasn’t an even cylinder. I removed it at the 25 minute mark when the skinny end was 130 degrees and the fat end 115. That was a bit rare, but we stuck that one in the refrigerator to use for sandwiches the next day, and it was still very delicious. 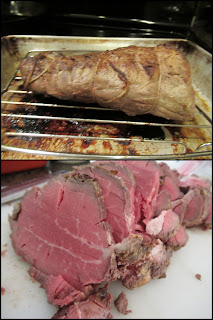