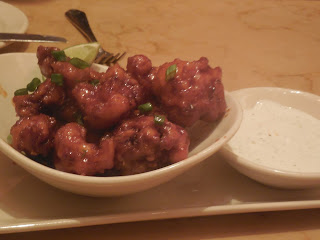 We tried a new appetizer when we went out to eat the other night, and it was so good that I’m going to have to try creating it at home. It was The Cheesecake Factory’s Korean Fried Cauliflower. I actually found a news segment where they explained how to make it, but they didn’t give recipes for the “Rice Flour Batter” and “Korean Chile Sauce” so I guess I’ll have to do some experimenting. Here are some of the recipes I’m going to use for inspiration.

General Tso’s Cauliflower – This recipe contains ingredients that are already in my kitchen, which is a nice thing. However, the “sweet and spicy” sauce doesn’t have any spice in it that I can tell. I wonder if they forgot an ingredient.

Korean Cauliflower Bites – I’ll need to get some Gochujang Sauce before trying this recipe. Hopefully that won’t be too much trouble.

Korean Fried Cauliflower – This recipe also needs Gochujang Sauce, and also some seltzer water. However, I think it might be closest to what we’re looking for, so it will be the starting point.

Here are the directions from the news segment:

Take 2 cups of cauliflower pieces (about 3/4-1″ chunks) and toss with salt, pepper, rice flour and baking soda. (See, they didn’t give amounts.) Then coat with 1/2 cup of rice flour batter. Cook for 4 minutes in 350° oil and drain. Combine with Korean chili sauce – which contains honey, sirachi and red chili paste. Garnish with sliced green onions, toasted sesame seeds and lime zest. Serve with Ranch dressing on the side. 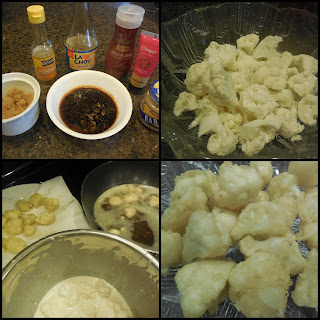 Instead of using it as an appetizer, I served it as a side dish, with a simple sauteéd chicken over rice with more Korean Barbecue Sauce. This will definitely on the meal plan in the future! 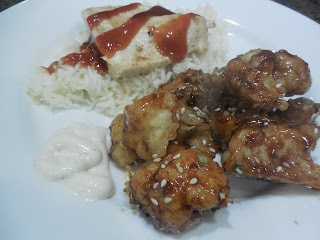